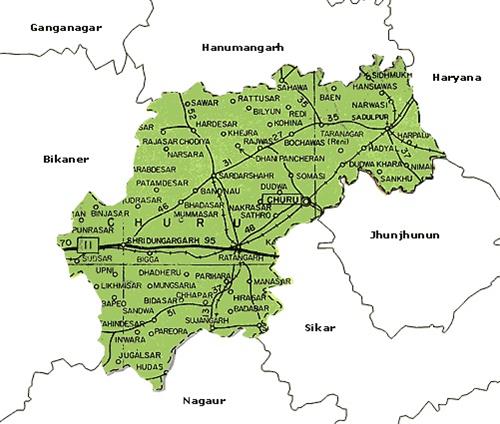 The primary unit of administration in Rajsthan is the District. Churu is one of the four districts under the Bikaner division, and the Churu administration is as a result, the sole responsibility of the District Magistrate (DM). He is the apex administrative authority in the entire Churu district, helping manage law and order; he is ably assisted in the process by the Judiciary and the Police.

General Administration Under the DM

As mentioned in the introduction, the District Magistrate is the overarching authority in the district. He is responsible for ensuring the lawful implementation of state laws and government orders, collecting land revenue, maintaining public records, making available consumer goods under the public distribution system, conducting peaceful elections, looking after the welfare of army personnel and to maintain law and order in the district. The Churu governance model has six levels. Below the District Magistrate, in decreasing order of authority, there is the Assistant District Magistrate (ADM), Sub Divisional Magistrate (SDM), the Tehsildar, the Patwari and the Block Development Officer (BDO).

The DM is assisted by the SDM in dispensing his duties. For each of the sevenChuru Tehsils, a Tehsildar is appointed, who helps the SDM in disbursing his duties. The Tehsildar is helped by the Nayab Tehsildar in turn. As a class two magistrate, a Tehsildar looks after the functioning of the local revenue courts, collects dues, maintains land records, disposes revenue cases and looks after the welfare of the public. Each Tehsil is divided into Patwar Mandals, each of which has an appointed Patwari to assist the landowners and farmers at village level.

For each of the six Panchayat Samitis in Churu, there is a Block Development Officer who ensures the proper implementation of development schemes.

The Judiciary in Churu